Deliveroo enjoyed a 59% increase in orders in the UK and Ireland between July and September despite the return of dine-in restaurant eating, as...
Read more
News

Inflation steady at 3.1% ahead of predicted surge in the cost of living 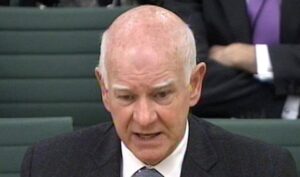 Sir Howard Davies, one of the most senior figures in the City, has expressed support for a ban on cryptocurrency trading, arguing it should come with a warning saying “Abandon Hope All Ye Who Enter Here” — the inscription over hell’s gates, according to Dante.

Sir Howard, who chairs NatWest Group and is a former deputy governor of the Bank of England and former chairman of the Financial Services Authority, said he was “very hostile” to crypto, adding that it was regarded as the biggest worry within NatWest.

More Britons now owned crypto assets than owned shares, Sir Howard claimed in a televised interview with the Centre for the Study of Financial Innovation. “That’s quite a worry.”

He expressed approval for the recent ban in China, saying that while he didn’t agree with everything from Beijing, he saw merit “in the instinct of ‘Let’s just ban the damned stuff. Why beat about the bush here’.”

While the Bank and the Financial Conduct Authority have warned that investors in bitcoin and other digital currencies should be prepared to lose every penny, they have not tried to ban it. The FCA estimated in June that 2.3 million Britons owned crypto assets.

Crypto was a leading source of fraud and financial crime, served no useful purpose to investors because it was too volatile and did not even possess the inverse correlation value of a safe-haven commodity like gold. It was also “a disaster” environmentally thanks to heavy power usage to “mine” new coins.

“It’s gambling as far as I can see, with a sort of libertarian veneer on top of it. You should put a big sign on the door saying, Abandon Hope All Ye Who Enter Here.” He stressed he was not talking of central bank digital currencies.

Sir Howard added that he regretted the conversion of polytechnics into universities. NatWest was now hiring more apprentices than graduate trainees, he said, 400 against 250.

Cartona gets $4.5M pre-Series A to connect retailers with suppliers in Egypt

Your WhatsApp to soon lose shortcut to Messenger Rooms

Load more
Disclaimer: usapatriotglobal.com it's managers and its employees (collectively "The Company") do not make any guarantee or warranty about what is advertised or above. Information provided by this website is for research purposes only and should not be considered as personalized financial or health advice.